Towtowmple
Totomple is the Totem Complien. It belongs to the Flora and Magic Elements. It grows from Totom and into Towtowmple.

Totomples have brown, cylindrical bodies separated into three segments. Each segment has one face carved on the face, often differing in expression. The middle segment has two arms, which form hands that have no fingers aside from a thumb. Totomples have two legs. The bodies of Totomples are made from wood, which seems to be carefully carved.

Totomples are forest spirits originally created by Natuhope. Totomples are a peaceful species that rarely fights, though if they are to fight, their three heads can cooperate to become immensely powerful. Totomples are friendly creatures, that often rest on shores, welcoming visitors who may approach. Occasionally they end up acting kindly towards Potenshells that wind up on the shore, unaware of their lower sapience. Totomples are herbivorous, and only feast on fruits and vegetables provided by nearby crops. Totomples grow from Totoms after at least two major events happen in their lives. It is said the expressions a Totomple conveys correlate with events in their life.

Totomples are genderless and exclusively reproduce by carving other Totoms from logs. It should be noted that Totomples are only willing to carve from dead trees, to avoid doing any harm to their environment. As such, Totomples are entirely incapable of photosynthesis, despite belonging to the Nature element. Since individual trees can provide a number of Totoms, they are able to keep a steady population.

Ever since the urbanization of Complanet, Totomples have been facing a crisis due to dwindling forest sizes. Totomples have been peacefully guarding their protests, but often they are walked right past. Totomples avoid conflict whenever possible, though on a rare instance, they may fight back in these protests.

Totomples are known to be native to the shores and islands of Nagthoto, which remains their primary habitat due to the country's large size. Occasionally, they will be seen in Xiyule or Gaiuso, but not with regularity. Totomples are also present on Western Collusia, where they live in small communities in large forests.

Some insights on Totomple's origins.

Totomple's name is a corrupted form of the word "totem pole." 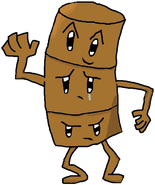 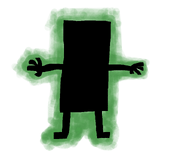 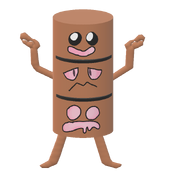 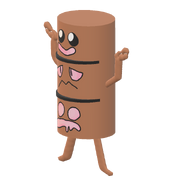 3D Totomple from another angle
Community content is available under CC-BY-SA unless otherwise noted.
Advertisement