Severed Body
Tileile is the Crystal Tile Complien. It belongs to the Earth and Magic Elements. It is not known to grow into or from anything.

Tileile's body primarily consists of a series of 3x3 tiles. The tiles in the four corners are red, yellow, green, and blue, while the ones on the sides are all a dull, reddish-brown. The central tile has a diagonal cross shape, with eyes on the sides, and a large mouth of several teeth, and a magenta area up top with several glyphs on it. Tileile has two hands and feet separated from its body, with a crystalline texture.

Tileiles are inhabitants of ruins around Smao Sha, created by Complinoids over a thousand years ago as a means of defense. Tileiles would lay their bodies down on the floor, waiting for intruders to step over them. Tileiles, versed in powerful magic, would be able to create massive blasts of energy to strike back, effectively protecting all treasures that would be beyond their reach. Tileiles are difficult to damage, as they are able to freely separate the tiles that make up their body at will. Long-range attacks are rarely that effective against Tileile, though close-combat attacks can be pretty damaging. Their bodies are made by a thin clay, so after some time, intruders began bringing large hammers to smash Tileiles before they could be caught.

Tileiles live for as long as their lives can be preserved. Tileiles from thousands of years ago still defend the ruins of Smao Sha, and to some degree, they have learned the process to build more Tileiles of their own. While their numbers have dwindled a bit since they first appeared, currently they do not seem to be in much danger. Most archaeologists try to warn Tileiles of their approach and explain in advance, hoping that they will not be attacked in the process.

Tileile lives almost exclusively in the ruins of Smao Sha. Techniques to build more Tileiles may have been spread to Semboe, Zhengkaya, and Kashekh for a brief period of time, but no Tileiles have been reported in these areas.

See all the fusions for Tileile here.

Some insights on Tileile's origins.

Tileile is derived from the word "tile."

Tileile's design is based on a series of floor tiles. It is also inspired by the Tileoid enemies from Super Paper Mario. 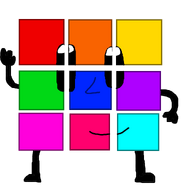