Ectopus
Octoplasm is the Octopus Complien. It belongs to the Water and Spectral Elements. It is the grown form of Ectopus.

Octoplasm has a large, bulbous head with two eyes, with a few more large obloid areas on its head. Octoplasms have a beak, and a beak-like mouth. They have eight tentacles with various suction cups at the end, which they can use to grab any prey. Octoplasms are green in color, with their eyes and suction cups being blue and purple. Octoplasms let off a light green glow in an area around them.

Octoplasms have far more developed tentacles, when compared to Ectopus, and this gives them a much larger advantage when it comes to capturing prey. Hardly anything can escape the grasp of an Octoplasm, since provided the Complien they are preying on is not in range, they can shoot it down with their ectoplasm, and swim up to it. Octoplasms swim by extending their tentacles, and quickly moving them back, allowing them to move at very fast speeds. Octoplasms can be spotted due to their bright lights, allowing other creatures to attempt swimming away before the Octoplasm arrives.

Octoplasms have a sharp, beak-like mouth which they can use to effectively tear through many species of Compliens under the sea. However, some species, such as Chronorouses and Hieleoses, which have hard shells, are able to resist the beaks of an Octoplasm. While the force an Octoplasm's beak can close at is quite strong, particularly sturdy Compliens can impair these Compliens, leading to them dying over time.

Occasionally, Octoplasms are blamed for floating up to the surface, and bringing down ships with their long tentacles. Sailors are warned to be careful in areas where this species may be common, since it may ultimately lead to their demise.

See all the fusions for Octoplasm here.

Some insights on Octoplasm's origins.

Octoplasm is derived from "octopus" and "ectoplasm," effectively in a reversed order from its previous form.

Octoplasm is inspired by octopuses, particularly the Casper Octopus, which was recently discovered and named for its ghoulish glow. 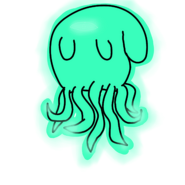