(out of water) Pure Body or Glass Cannon

(in water) Discorporated or Liquid Body

Utility
Halote is a Complien made of sea salt. It has the Earth and Light elements. It does not grow.

It is a marine predator that can exist as either a solid crystal or a saltwater solution.

It looks like a large worm composed of connected blocks of halite. On its front end is a face made from glowing yellow orifices. It has a thin halo above its head.

Halotes are fairly common in the Southern Ocean. They spend most of their time in the epipelagic zone, feeding on plankton and small creatures. They can also be found on beaches occasionally.

They are entirely made up of sodium chloride salt, held together only by complixonox. Their complixonox binds the salt together into one cohesive Complien whether or not the salt is crystallized into blocks or dissolved into water.

This makes them functionally invisible and intangible underwater. While in sea water, Halotes can also draw in or expel dissolved salt to manipulate the local salinity. They use this to kill and eat plankton and other small marine Compliens by lowering the salt concentration so much that the creatures explode from osmosis.

Halotes do not actually consume the physical remains of things they kill. Instead, they absorb the complixonox released, bolstering their cohesivity. The organic residue falls to the ocean floor, where it serves as a food source to many deep-sea Compliens.

Halotes need to feed almost constantly, since their dissociated state takes a heavy toll on their complixonox.

They reproduce every few months, except during winter. During low tide, they come out of the water and slither as far up the beach as they can go before dying. Their corpses fall apart into blocks of rock salt. When high tide washes over the blocks, each one dissolves into a new, tiny Halote.

They are not particularly intelligent. They do, however, display altruism towards Complinoids and will raise drowning ones out of the water by recrystallizing their backs above the surface.

Their main predator is the Krilastie, which can forcibly precipitate Halotes out of solution. They are also vulnerable to terrestrial animals eating their corpses.

Some insights on Halote's origins.

Its name is derived from halite and halo.

It was based on sea snakes and rock salt. 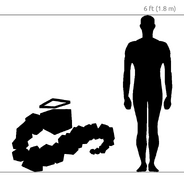 Height comparison with a human

Community content is available under CC-BY-SA unless otherwise noted.
Advertisement